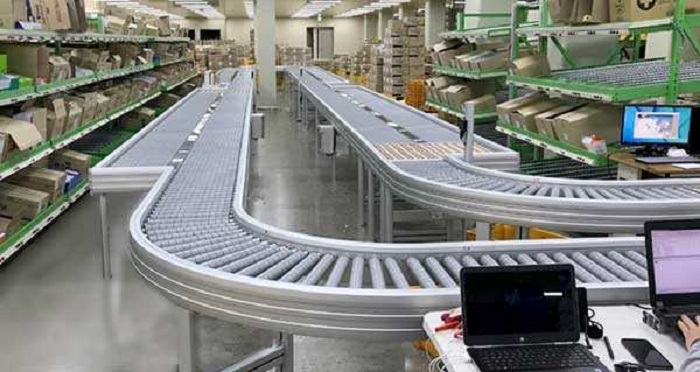 South Korean has the 10th largest international Pharmaceuticals Market and is the 3rd biggest in Asia. This Pharmaceutics Market will grow to more than 20 Billion US$ in the year 2020. One of the top pharmaceutical manufacture in South Korea is the fast-growing Hanmi Pharmaceutical Co., Ltd. They are very aggressive in R&D and in the automation facility. Hanmi handle e-commerce B2B, selling to drug stores and wholesale. Their logistic center in Paltan, South Korea, operating by their subsidiary Online-Pharm Co., Ltd., handle more than 10000 orders / 13000 boxes during the peak day. IMG-09-1 2 The existing picking systems and the conveyors of the Hanmi affiliate Company were over 10 years old. Their business had been increased significantly in the last decade and they had problems to meet the increasing demand with their picking and logistic task. The system integrator for this project was SMCORE Inc, (former SMC, Smart Mechatronics Core), who is one of the major logistics system suppliers in South Korea. They installed the shelving and the pick-to-light system and took over the scope of Integration. SMCORE offered with Avancon a new idea to solve this issue by suggesting the picking zone concept using the new and exceptional Avancon Conveyor system. With this new solution, their logistics “bottle neck” has been eliminated. The avant-garde Avancon ZPC (Zone Powered Conveyor) System provides more dynamic buffer space with its ZPC-function. In addition, the new solution includes a looping system. When a certain picking zone is full, the next box goes automatically around the loop and tries to enter the same zone later, when the free space is available. Avancon OTUs, the Omni-directional Transfer Units, provides smooth and fast transfer where the box has to be diverted or transferred to another conveyor line or around a corner. Thanks to these most modern materials handling systems the entire line speed – including the existing area – has been increased by 17 % including the Picking Performance. The modular ZPC-System can be easily extended. So three more zone conveyors were installed. A convincing aspect was the safety of the Avancon system for human contact with the conveyors. A finger protection for each driven conveyorroller doesn’t exist anymore. Here is everything protected inside the conveyor frame – including the drive system and the control system. Nothing sticks out – not even a screw-head. Now the operators are freely working around the Avancon conveyors. The whole conveyor lines are IMG-09-2 IMG-09-3 3 smooth and streamlined with their Aluminum anodized profiles, which feel like silk. Avancon was able to manage everything within the required time thanks to its “plug-in” concept. All modules were pre-assembled, pre-programmed and tested before shipping from the factory in Switzerland. It also provides more vertical space because there is no more cable ducts underneath. This is a great advantage for those who have to follow the global GMP regulation because now they can actually clean the space underneath the conveyor very easily. Because the Avancon ZPC-Conveyor Concept works fully autonomous, cable ducts and a central control cabinet are no longer necessary. This makes the whole investment really economical. Another great thing was the fast installation. The given time was quite limited because Hanmi could not stop the daily operation. Avancon was able to manage everything within the required time thanks to its “plug-in” concept. All modules were pre-assembled, pre-programmed and tested before shipping from the factory in Switzerland. And with this “plug-in” concept the installation is automatically established simultaneously with the electrical connection, which includes also the data exchange. It was the first time, a new experience for everyone who was involved in this project. They had no experience with Avancon products before. Despite this, even the first day of operations went very well, without any issue. The system has been running for almost 1-year. Everything is in good condition and Hanmi is considering replacing all their conveyor systems with the Avancon concept.

You can find more details under the following link

There is also a video about this project. You find it in the video section under: