By Richard Newbold
The Warehouse Exchange (Part of Returnloads.net) 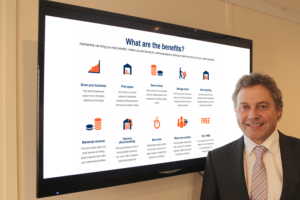 Business leaders such as Michael Brown of The Logistics Terminal in the Port of Tilbury, explained warehouse space had been “for all practical purposes booked out”, as some businesses have stockpiled out of fear the negotiation would abruptly end without a deal.
If the UK leaves the EU without a deal – which is now a distinct possibility – some importers from the EU could face delays at customs due to increased administrative processing at border points. Sea Ports such as The Port of London on the River Thames at Tilbury and London Gateway should not be affected as badly as Ports such as Dover as the majority of imported goods come via containers which are mainly on deep sea vessels which predominantly come from outside the EU.
Dover, which mainly deals with road haulage vehicles via ferry or through the Channel Tunnel will be the key choke point: 17 per cent of the UK’s entire imports come via Dover in 2017, 98 per cent of which is from the EU.
I think that the Dover could initially be hit hard by Brexit. Additional minutes spent at customs could compound very quickly and end up with congestion to the surrounding area in both France and the UK.
Vehicles carrying freight could be stuck in transit, unable to deliver in the relatively predictable
timeframes that supply chain planners have become accustomed to.
No one quite knows how severe the impact will be, but uncertainty is always the factor that scares business.
Some companies have been putting preparations in already; Airbus announced they were going to stockpile goods in preparation of increased tariffs and supermarkets have reportedly been asking suppliers to provide a breakdown of any ingredients and packaging materials sourced from the EU.
The UK government is unclear when asked whether retailers will need to stockpile or not so it
appears that each company will have to make their own decisions.
Stockpiling is to “accumulate a large stock of goods”, usually in preparation for emergency to
prevent shortages of essential goods and Warehouses in the UK are seeing space being booked over and above normal quantities at this time of year.
If the UK ends up going onto WO rules of trade with the EU increased border controls and confusion may create a period where some foods and other essentials could be delayed on both sides of the channel.
At the moment, the UK operates on a “just in time” model, which means that groceries like fruit and vegetables arrive fresh and get stacked on the shelves immediately.
The crucial element of effective stockpiling is available space. Companies need somewhere to put the goods whilst they are waiting to be transported to their final destination
Companies commit to strict long-term leases that take a lot of time and money to agree. The whole process of finding and taking warehouses is so slow that you do not want to have to do it too often.
This results in organisations over-estimating their needs and buying more space to accommodate growth.
Many don’t grow as expected or only need increased capacity at certain times of year. Data suggests that warehouses in the UK are on average only 75 per cent full.
That means there are millions of square feet of warehouse space that is simply not being used – and that includes vast amounts of chilled or frozen space for food storage.
A change in mind-set is required and few businesses know how to tap into this network of space, but this under-utilised space is perfect for when short-term space is needed.
Businesses must get better at using space that is already built instead of building or renting new
warehouses to accommodate short-term uncertainty.
A solution to the stockpiling issue and contingency planning in general is on-demand warehousing such as ‘The Warehouse Exchange’ which is part of Returnloads.net the leading freight exchange in the UK.
Like AirBnB but for warehouses, this warehouse marketplace allows organisations to list their
available warehouse space, be it 10 or 10,000 pallet spaces, and makes it available to businesses who need the space. Warehouse Exchange which was launched in 2017 already has over 3,400 members all owning warehouses in the UK and currently lists over 75 million sq ft of available space.
Space can be rented for as little as a month at a time, on a pay-as-you-go basis, so it is extremely flexible to be scaled up and down when required.
Web based platforms such as Warehouse Exchange cover every type of requirement – from
temperature controlled to bonded, from bulk to outdoor space, and as an online marketplace allows every type of business to prepare for all eventualities.
We should all hope that it will not come to it, but if we do need to stockpile then it is fair to say the
space is out there, it just needs to be unlocked in the same way that AirBnB unlocked millions of
spare rooms and Returnloads.net unlocked thousands of empty trucks offering them backloads from all over the UK back to where they are based. Those forward thinking businesses like Warehouse Exchange adapt to change and adopt new ways of thinking and find themselves and their users better placed for facing the unknown.